The small idea that grew 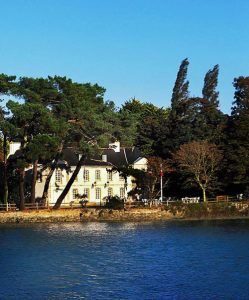 The idea of a golf course area Fouesnant goes back to 1938. But it was only in 1959 that a 9 holes were constructed, situated in La Forêt Fouesnant. The locality was then a small fishing harbour in the shadow of its older brother « Concarneau », 8 km further away.

At that time, golf lovers, including a lot of British players visiting Brittany, could only play at ‘Golf de Dinard’. The creation of the ‘Golf de Quimper et de Cornouaille’ – as it is correctly known  – on a charming site (History will later confirm how exceptional it is was at a time of strong urbanization along the coast) introduced the game of golf  in the equivalent of Cornwall in France.

This ongoing development of golf as a sport and Leisure activity led to the consideration of the extension of the first 9 holes to an 18 holes Course. The designer approched was Fred hawtree Jr the son of the original, celebrated british designer, of the first 9 holes. The new part was ignaugurated on march 29 1992, 54 years after the original idea “Golf is a game of persevereance”.